A story told by an Udihe speaker, in which she recalls the birth of her son, his sudden sickness in the middle of the night, only a few days after birth, and his unexpected death the following morning. On the night he got sick, the speaker claims to have seen the dark shadow of a shaman woman grab her son and is convinced that it is her who killed him.

Recording: Udihe videos were recorded by Maria Tolskaya, some with participation of Elena Perekhvalskaya, in 2006 in the village Krasnyy Yar and in 2011 in the village Agzu. A shorter variant of this story recorded in 1999 from the same narrator is published in Kazama (2004: 501). 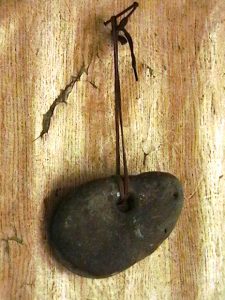 Image credit: Photograph of a charmstone hanging on a wall in the narrator’s house taken in 2006 in the village Krasnyy Yar by Maria Tolskaya.