This is a traditional folktale explaining why alder tree leaves flourish later than others. In the story, a fairy living alone in the forest with her baby daughter gets a revelation in a dream. After this, she decides to nurse an alder tree leave into a girl. While the fairy leaves the forest to fight her father’s enemies, this alder tree girl raises the baby daughter.

Note: Another version of the story recorded from the same narrator in 1999 is published in Kazama (2004b: 269). The alder tree in Udihe folklore is surrounded by taboos and legends. It is thought to be the place where ancestral spirits live (cf. Kormushin 1998: 31). This must be related to the fact that the wood of alder trees turns orange when the tree is cut, which gives the impression of bleeding. 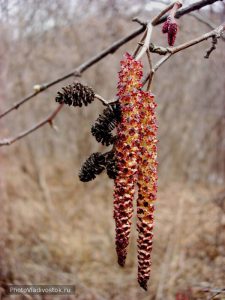