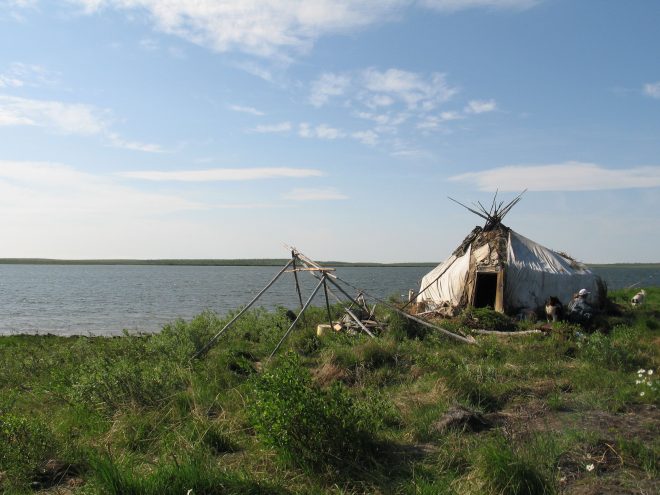 Tundra YukaghirÂ (wadul) is a member of the Yukaghir language family, comprising Tundra and Kolyma Yukaghir (odul). It is spoken in the tundra west of the Kolyma River. Tundra and Kolyma Yukaghir are the only two remnants of what used to be one of the dominant languages/language families of north-eastern Siberia. The Yukaghirs are considered autochthonous to north-eastern Siberia. In the 17th century, when the Russians first entered Siberia, the territory occupied by Yukaghir clans covered the vast area between the Rivers Lena and Anadyr. They were nomadic hunters and gatherers, organised in matrilineal clans.The centuries that followed saw a rapid decline of the Yukaghirs. Cyclic measles epidemics, combined with the merciless tax policy of the colonisers, reduced their numbers to some 200 people in the beginning of the 20th century. Under the Soviet government, the demographic situation has somewhat improved (1509 individuals according to the Russian Census 2002), but the Yukaghir language and culture are on the verge of being irretrievably lost.

The two Yukaghir languages share only a relatively small part of the vocabulary and are not mutually intelligible. The basic grammatical structures, however, are very similar. Both languages have residual vowel harmony and a complex phonotactics of consonants. Both have rich agglutinative morphology and are strictly head-final. There is little finite subordination, while coordinate structures are practically absent. The most spectacular feature of the Tundra Yukaghir grammar is the split intransitive alignment system based on discourse-pragmatic features. Roughly, in absence of narrow focus, the system is organised on the nominative-accusative basis. When focused, direct objects and subjects of intransitive verbs are co-aligned (special focus case, special focus agreement).

Tundra Yukaghir is a moribund language. According to an informal survey conducted in 2010 by Dejan MatiÄ and Cecilia OdÃ©, there are sixty three speakers of this language left, most of them over sixty. The Tundra Yukaghirs, most of whom live in the villages of Andryushkino, Kolymskoe and Chersky, have been under strong Even influence for centuries. This resulted in their adoption of reindeer herding as the major subsistence pattern.

The texts given here were recorded by Dejan MatiÄ and Cecilia OdÃ© in 2010 and by Dejan MatiÄ in 2011 and 2012 in the villages of Andryushkino and Chersky and in the city of Yakutsk. Transcriptions and glosses were provided by Dejan MatiÄ, mostly in cooperation with Vasilij NikolaeviÄ Tret’jakov, a native speaker of Tundra Yukaghir from the village of Chersky.Â The work on the texts was financially supported by the Max Planck Society.

Most images were taken by Dejan MatiÄ, and some by Cecilia OdÃ©.